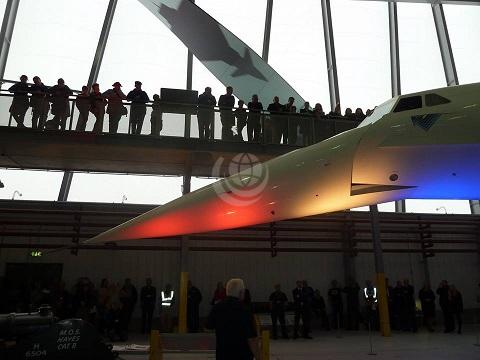 The hydraulic systems on Concorde 101 G-AXDN had not been used since she was retired in 1977, but with the technical support of Hydraulics Online a plan was created to bring them back to life…

Duxford Aviation Society, owners of the British Airliner Collection, were keen to improve their display of Concorde 101 G-AXDN at the Imperial War Museum. In response, Heritage Concorde proposed making her the first UK Concorde since 2003 to be able to “droop” her nose… and then approached Hydraulics Online asking if we could help on “Project Salute” – we certainly could!

The nose was last lowered in the 1980’s using the emergency free fall system after an attempt to use the aircraft’s hydraulic system had failed. Whilst there was clear support for the latest project there was also, therefore, a great deal of concern and considerable work involved in ensuring that there would be no damage to G-AXDN and that all Health & Safety requirements would be met.

Heritage Concorde provided our team with the technical specification for the Concorde nose systems and then undertook the preparatory work needed to inspect the associated aircraft wiring and nose/visor control systems. The nose is operated by two hydraulic systems – green being the normal and yellow the standby; only the normal system was to be used, in isolation from all of the other hydraulic systems on the aircraft.

Hydraulics Online designed and built a bespoke hydraulic power pack that could be connected to the existing nose hydraulic systems and allow the visor and nose to be lowered and raised at any time; safety features included a pressure gauge and a hydraulic pressure valve. Meanwhile the Heritage Concorde team began the painstaking task of cleaning and preparing the existing nose systems and mechanism and examining the electrical controls for the nose within the cockpit.

The hydraulic power pack was put through a number of rigorous tests before it was connected to the nose system; once installed, the specialist hydraulic mineral oil was added, before bleeding and flushing the system through to remove any remaining debris. Having been idle for so long, the aircraft hydraulic systems needed to be fully cleaned. After 18 months the project was successfully completed; G-AXDN is now the only Concorde in the UK with an operational nose and visor. Graham Cahill, Director of Projects at Heritage Concorde (pictured centre) commented: “It has been a real pleasure dealing with the team at Hydraulics Online; they have been very accommodating throughout the project, giving expert advice and technical support… We really couldn’t have asked for more.”

David Garside, Chairman of Duxford Aviation Society, unveiled G-AXDN’s droop nose at the Imperial War Museum, Duxford on 24th October, 2014 – timed to coincide with, and “Salute”, the 11th anniversary of the last commercial flight by Concorde. He added: “It is 37 years since Concorde G-AXDN was flown to Duxford and since the hydraulic and electrical systems were last in operation. The restoration projects have required the servicing and overhaul of many intricate components and considerable patience and determination has been required over a two year period to ensure their successful completion… We gratefully acknowledge the generous sponsorship and support from Hydraulics Online Ltd and for designing and supplying the hydraulic power pack.” Mark Tonks, Managing Director of Hydraulics Online Ltd said: “We were absolutely thrilled when Heritage Concorde asked if we could help on “Project Salute”. Our customer base is global, we’re always involved with a vast range of projects and systems design work and we deal with some big household names… but Concorde is in a different league. Seeing G-AXDN’s nose and visor moving again, knowing that we were part of the team that made it happen, is very special indeed.”

The unveiling of Concorde G-AXDN and her droop nose made the headlines and was featured on the BBC News and ITV News as well as being reported on by local and regional press. Why not go and visit Concorde 101 G-AXDN and see her amazing droop nose and visor for yourself? Click here for opening times and directions to the Imperial War Museum, Duxford. In the meantime, you can see footage of the nose and visor moving here: Video clip one and video clip two.

For more information, please read our Introduction to Concorde.